What is the Wifedoge? Meet the cryptocurrency ‘wife’ of Dogecoin that grew more than 3,000% in one day and Elon Musk already ‘liked’ it

In just 24 hours, the new cryptocurrency Wifecoin, ‘wife’ and clone of Dogecoin, increased its market capitalization by more than 3,000%, should you buy?

Last July they launched the cryptocurrency Wifedoge , which is presented as the ‘wife’ of Dogecoin , but in essence it is a clone of it. In addition to being a curiosity of the ‘crypto’ world and having the ‘like’ of Elon Musk , the token surprised everyone this week with a growth of more than 3,000% in market capitalization in just one day, according to data from CoinMarketCap .

This Tuesday, August 31, the Wifedoge exceeded 2.32 million dollars in market capitalization , a figure 3,294.29% higher than the 68,350 dollars with which it began on Monday morning.

However, the ‘wife’ of the Dogecoin failed to sustain the streak and for this Thursday, September 2, its capitalization fell to $ 301,406 . 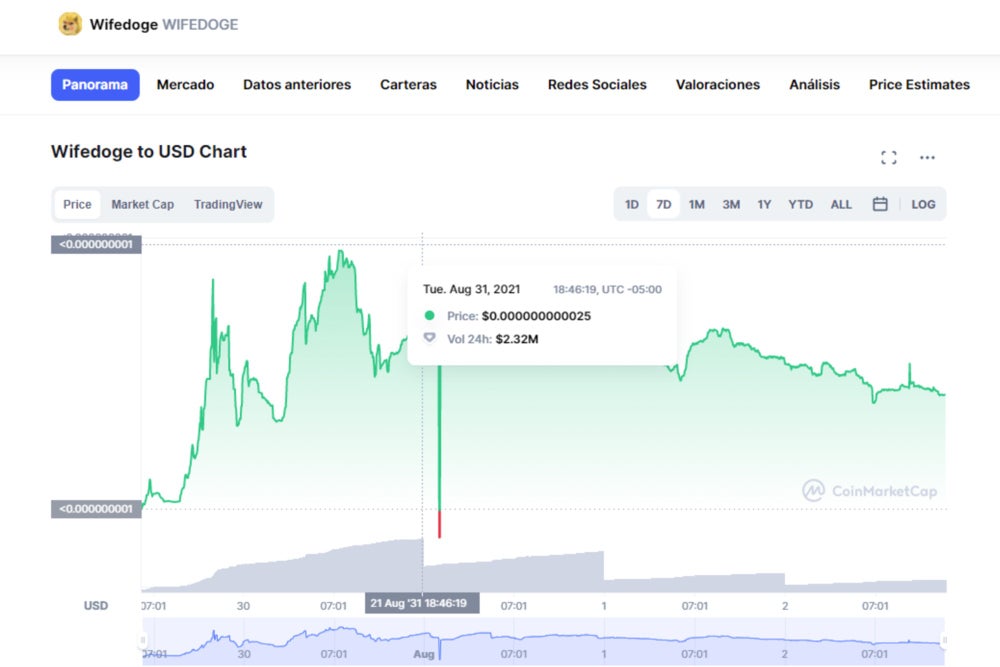 Wifecoin represents the ‘inception’ of cryptocurrencies , as it emerged as a parody of a digital currency (the Dogecoin ), which in turn was inspired by a meme to parody Bitcoin , so surreal!

The creators ensure that the value of each Wifecoin token will be equivalent to one Dogecoin . Excellent news, considering that the DOGE increased its value by 4.600% in one year and both Elon Musk and Mark Cuban see it as the “strongest” cryptocurrency.

In addition, they announced that they would reserve 5% of the Wifedoge units for Elon Musk .

“We will give them to you at the right time, otherwise 5% of the tokens will be forever blocked,” reads a tweet from the Wifecoin account.

In fact, the developers of the new cryptocurrency ‘meme of the meme’ are so sure they have the endorsement of Elon Musk , that they thanked him for his support on Twitter.

Thank you Elon Musk. I am Wifedoge. Doge’s wife! Now is the fourth launch day on Pancakeswap! Thanks for tweeting to cheer on Wifedoge. Trust us, we will soon surprise global investors even more. Our team is working hard, ” reads another tweet.

Thank you Elon Musk I’m Wifedoge. Doge’s wife! Now is the fourth day of launch at Pancakeswap! Thank you for tweeting to encourage Wifedoge Believe us, we will soon surprise global investors even more. Our project team is working hard #wfiedoge #dogecoin#doge #PancakeSwap pic.twitter.com/HAwvYKDjA7

Should you invest in Wifedoge?

Experts assure that these vertiginous ‘ups and downs’ are caused by fraudulent manipulations of the crypto market, which generates multiple victims.

“The sharp ups and downs in the price of low liquidity assets are often the result of fraudulent manipulations known as ‘pump and dump’ and that consist of inflating their value and then selling it at overstated prices. The lack of regulations in the crypto market causes many investors become victims of this scheme, “ said RT en Español .

The decision to invest or not in Wifedoge is like with any other cryptocurrency : if you have extra money that you are willing to lose in case things go wrong, then go for it. It never hurts to have some tokens in your cryptocurrency portfolio that could skyrocket more than 3,000% in 24 hours .

Fill Your Talent Gap by Sourcing Candidates From the Veteran Community

Udemy Takes All Your Career Training Goals to New Heights