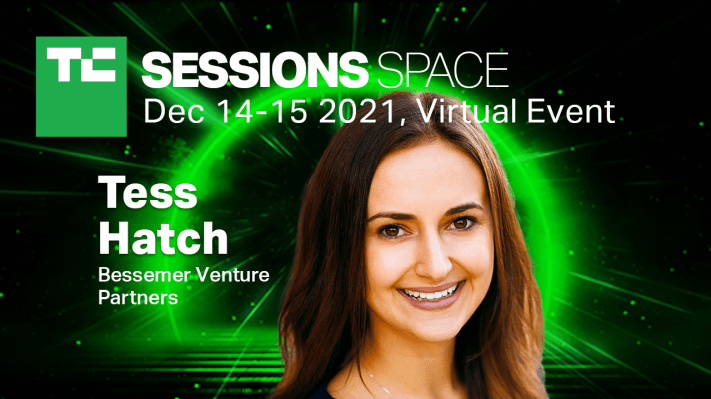 This year has been one of the busiest yet in terms of new commercial launch companies coming online, with companies like Astra and Firefly Aerospace actually getting rockets up and running (if not flying as designed quite yet), and with landmark human spaceflight missions from Blue Origin, Virgin Galactic and SpaceX. And with more constellations in operation, built out of satellites equipped with sensors capable of providing new and more detailed data for commercial use back on Earth, the timing is right for startups everywhere to leverage a new data Gold Rush to build businesses based on in-space resources that just weren’t available before.

Joining us at TC Sessions: Space happening December 14-15 is Tess Hatch, partner at Bessemer Venture Partners, who focuses largely on frontier technology and specifically on the commercialization of space, drones, autonomous vehicles and the future of agriculture and food technology.

Hatch brings a lot of expertise to the table. She studied aerospace engineering at the University of Michigan before earning her Master’s degree in aeronautics and astronautics engineering from Stanford. She then continued on to Boeing, then SpaceX, where she worked with the government on integrating its payloads with the Falcon 9 rocket.

We’re excited to hear from her at TC Sessions: Space. Grab your tickets to join us and save $100!

Sigfox, the French IoT startup that had raised more than $300M, files for bankruptcy protection as it seeks a buyer – TechCrunch

Domestika raises $110M on a $1.3B valuation to expand its learning community for creative types – TechCrunch