Crushing a Goal Leads to Helping Others


In this series, NerdWallet highlights people’s debt payoff journeys. This month, new Nerd Holly Carey looks back at how ditching debt sparked an interest in personal finance and ultimately led her to join NerdWallet. 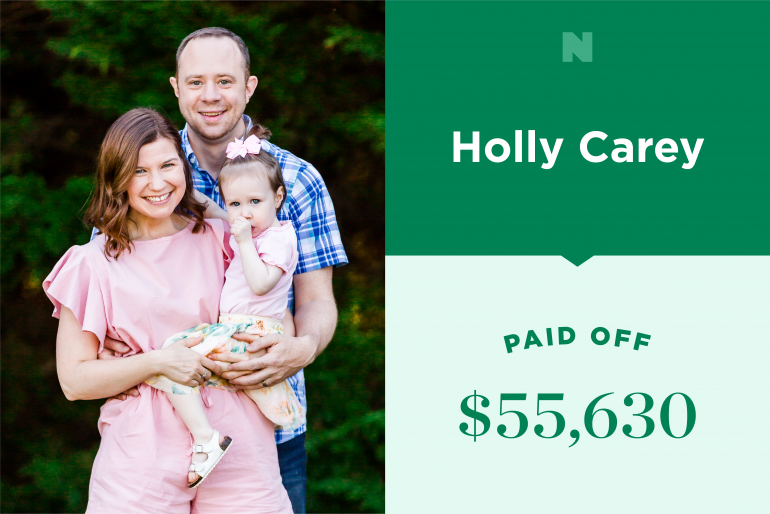 I wasn’t always nerdy about money. In fact, when I decided to take control of my finances in January 2015, I didn’t even know how much debt I had.

My mom gave me a personal finance book that year for Christmas. I read it in two days and went from being oblivious about my finances to starting an emergency fund and creating a budget. My ultimate goal was to pay off all of my debt, and I gave myself 30 months to do it.

I still remember when I sat down to crunch the numbers. I honestly had no idea how much my car, credit cards, personal loans and student loans would come to. I was shocked when I discovered I owed more than $55,000.

This was especially distressing because I had recently moved to Washington, D.C., and was already nervous about the expensive city I had just made my home.

Creating a budget and cutting expenses

I was fortunate to have a secure job with the government that paid well. At the time, I worked for the Navy as a civilian and served in the Navy Reserve as a public affairs officer. By the time I paid off my debt in March 2017, my total annual salary was around $100,000.

I used a zero-based budget, which means each month my income minus my expenses, debt payments and savings equaled zero. This gave me a clear plan for spending and saving every month. For example, when the money I budgeted for entertainment ran out, I stopped going out for the rest of the month. I also used cash to pay for certain spending categories — like eating out, groceries and the rare occasion I went shopping — to make sure I didn’t overspend.

Even though I was making a good income, I still felt stretched every month because of my monthly minimum payments and the high cost of living in D.C. My 600-square-foot studio apartment cost $1,800 a month.

After learning how to make and stick to a budget, I got serious about cutting my expenses. I moved in with a roommate, which reduced my rent by $600 per month. I rarely ate out, and when I did, I ordered happy hour specials. I stopped buying clothes and even canceled my Amazon Prime membership. These changes weren’t easy, especially after moving to a new city and wanting to get out to explore and meet new people, but I knew they weren’t permanent.

There are two popular methods for paying off debt: the debt snowball or the debt avalanche. If you use the debt snowball, you pay off your debts in order from smallest to largest. You focus all your extra debt-payment money on the smallest debt while paying minimums on the others. When that’s paid off, you roll over that money to the next. With the debt avalanche, you pay off debts in order of the highest interest rate, again focusing all extra money on one debt while paying minimums on the others.

I used the debt snowball method, which gave me momentum in the early days by paying off the smallest debts. That freed up more money to use when it was time to tackle the larger debts, like my student loans.

One year into my debt payoff journey, I met my future husband, Brian.

I remember Brian taking trips to Las Vegas and the Rio 2016 Summer Olympics, and I secretly wondered if he was racking up a pile of debt. I doubted our relationship would work if we had different philosophies about money. I was working so hard to get out of debt, and I didn’t want to be tempted to abandon my new lifestyle.

Once we were seriously dating, I opened up to Brian about my debt and my plan to pay it off. I was relieved to learn he didn’t have any debt. And although he wasn’t opposed to debt like I was, he supported me in my journey and celebrated with me when I made my last payment nine months before our wedding. I had paid off all of my consumer debt in 26 months.

Our money discussions prepared us for our engagement, paying cash for our wedding, relocating to a new city and buying a house. In June 2019, Brian and I welcomed our daughter into the world. In those early days as new parents, we were fueled by adoration, fear and caffeine while learning to soothe our crying baby, doing endless loads of laundry and sneaking naps while she slept. However, because we had remained debt-free and stayed intentional with our money, we never had to worry about finances with our new baby.

Now almost four years into our marriage, we remain debt-free (except our mortgage), continue to set financial goals, create a monthly budget and have great communication about money. Our next goal is to pay off the house early.

Once I learned about personal finance, I couldn’t stop myself from sharing it with everyone I knew. I even conducted coaching sessions to teach family and friends how to budget and set financial goals. You can imagine my excitement when I saw the job posting for an editor position at NerdWallet — my dream job!

How to ditch your own debt

If you’re feeling inspired to tackle your own debt, consider these steps:

The article How I Ditched Debt: Crushing a Goal Leads to Helping Others originally appeared on NerdWallet.

Sail Through Omicron-Induced Market Volatility With These ETFs

5 Things to Look For When Hiring a Marketing Agency